Greece has entered the robotic era in Orthopedic Surgery. This technology is already being successfully implemented in some of the largest hospitals (approx. 180) in the USA, as well as in Italy and Germany.

The Management of Metropolitan Hospital has reaffirmed its dedication to offering top-level healthcare services by installing the Robotic Arm Interactive Orthopedic System (RIO®), unique in Greece. The RIO® can be used to perform minimally invasive and highly accurate procedures on the knee and hip.

Using the innovative MAKOplasty® Partial Knee Resurfacing robotic technique, a large part (over 50%) of patients who must undergo total knee arthroplasty can avoid it by opting for a less extensive and more effective procedure. This technique only replaces the damaged part of the articular cartilage and not the whole joint, as is the case with total arthroplasty. This restores the knee joint and offers natural movement, as well as faster and painless return to everyday activities.

In January 2016, the Metropolitan Hospital Robotic Orthopedic Surgery Clinic completed two years of operation. The Management of Metropolitan Hospital and the thousands of people who visited the Clinic to receive information and immediate solutions to their problem contributed in the constantly rising activity of the department.

In the last two years, the MAKO ultra-modern US orthopedic robot has been installed exclusively in Greece at Metropolitan Hospital and is used for ultra-high precision individualized knee and hip surgeries with accuracy up to 1/10th of a millimeter. The MAKO robot is the only orthopedic robot worldwide and introduces cutting-edge technology. Using the MAKO robot, injuries of the knee joint as well as damage to the hip joint can be treated on time, long before they require total joint replacement. 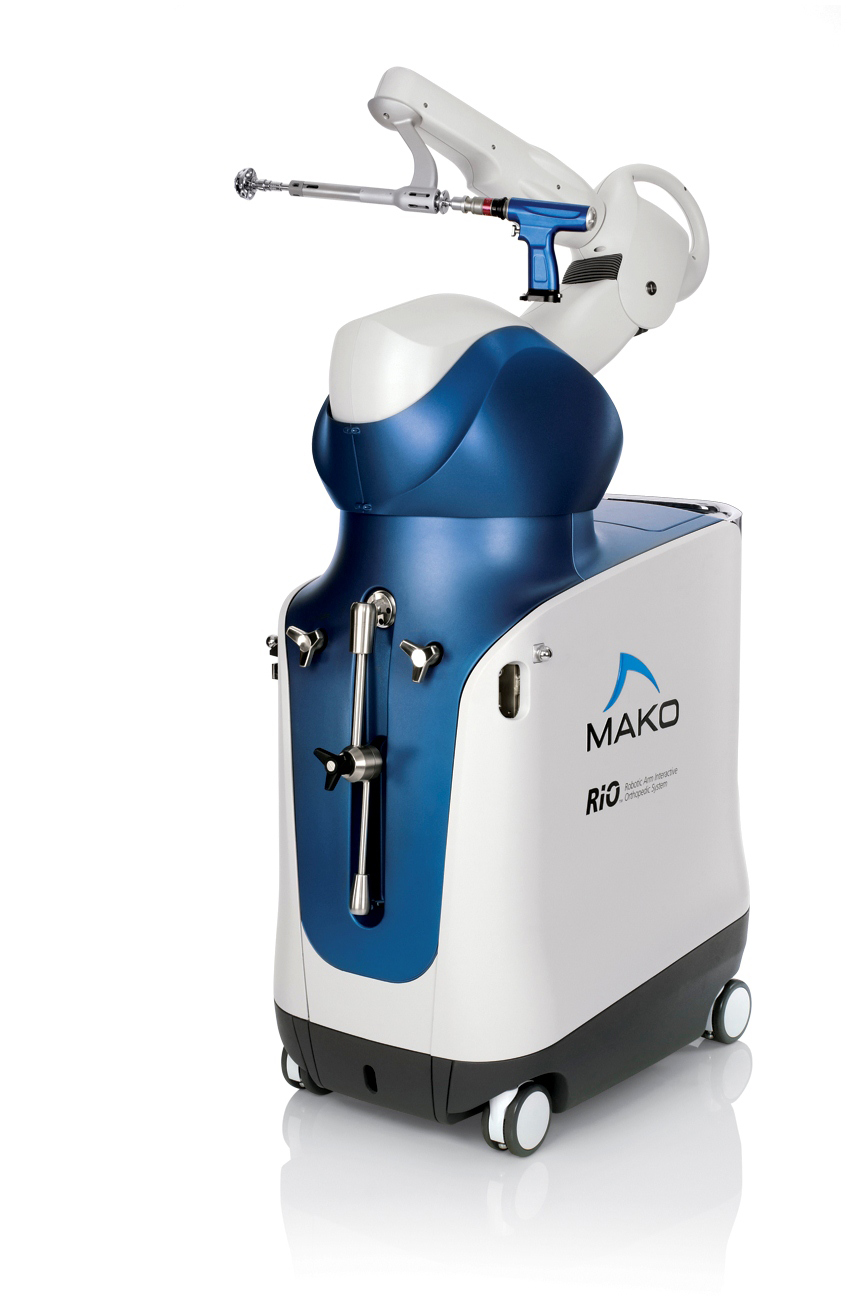 Partial joint replacement may be performed on suffering parts of the knee. Early lesions of the knee axis, such as valgus or varus angulation, can now be treated, and bending or extension restrictions can be reduced or eliminated. Robotic knee surgery provides an excellent solution for all patients with arthritis who visited their doctor and were told that they probably needed joint replacement, but should wait because it was too early.

As far as the hip is concerned, a joint suffering from osteoarthritis or any other degenerative disease can undergo minimally invasive robotic replacement surgery with special MAKO titanium implants, available exclusively for robotic use.

The sophisticated technology of the MAKO orthopedic robot allows preoperative planning, with accurate surgical simulation, showing the surgical outcome on three axes with 1 degree precision, even before performing the surgery. At the same time, when necessary, the team of doctors successfully apply newer hip and knee arthroplasty techniques, such as the minimally invasive surgery (MIS) and navigation techniques.

Several doctors from other countries immediately embraced the new technology and visited the Clinic to attend training in robotic orthopedics, as this Clinic is equipped with the only orthopedic robot in Greece and is one of the few in Europe equipped with such technology.

During these first two years of operation a large number of greatly successful knee and hip surgeries were performed, and 7 doctors, 5 nurses and 2 MAKO computer operators were fully trained. Moreover, two full simulation workshops were also organized for doctor training.

The Metropolitan Hospital Robotic Orthopedic Surgery Clinic has been officially recognized internationally as a Center of Excellence, i.e. a center of excellent application of specialized knowledge, as well as a training and research center. The Clinic has hosted visiting doctors from 5 countries and technologists from 4 countries for short training, as well as patients from 9 different countries who have undergone surgery. The Metropolitan Hospital Robotic Orthopedic Surgery Clinic was recently featured at a conference in the US as the most successful and fastest growing in the world.

The Clinic directors were invited to the USA to undertake the training of new doctors there and in Europe. Not only does the Clinic perform all currently available applications, but the research center of robotic applications in the US has also made a commitment that this Clinic will be the first worldwide with access to the newest applications currently under development. Moreover, the Clinic doctors will be actively involved in planning and researching future robotic orthopedic applications.

Newer applications relate to other body joints and other orthopedic conditions. Robotic orthopedic technology is so effective that it has been adopted by 220 of the largest and best hospitals in the USA. It is certain that in a few years all orthopedic interventions will be performed using this technology; we are just lucky enough to enjoy the technology of the future today. With continuously increasing activities and active research effort, the Metropolitan Hospital Robotic Orthopedic Surgery Clinic will continue to make us proud..

Similar benefits can be enjoyed when performing the MAKOplasty® Total Hip Arthroplasty robotic technique for hip osteoarthritis, with the most significant being the high precision when placing and aligning the prosthesis, a key factor for impressive long-term results.