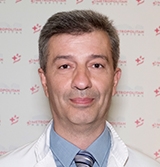 This email address is being protected from spambots. You need JavaScript enabled to view it.
PROFILE

Mr. Fountoulakis is a General Surgeon specializing in upper gastrointestinal surgery. He graduated from the Athens University Medical School in 1990. After completing his military service, he went to Great Britain where he attended all his surgical training and was awarded a specialty certificate in General Surgery (Certificate of Completion of Training in General Surgery, CCT). Since 1997, he has been a Fellow of the Royal College of Surgeons (FRCS) and he is registered in the Specialist Register of General Medical Council, UK.

Mr. Fountoulakis worked for 20 years in some of England’s largest University Hospitals and passed successively through all the ranks of the British Health System, up to the rank of Clinical Director (Consultant). After completing his training in General Surgery, he attended specialty training for four years (three years in England and a year in Sydney, Australia) in upper gastrointestinal surgery, including benign and malignant esophagus, stomach, pancreas and biliary diseases, as well as the surgical treatment of morbid obesity. Mr. Fountoulakis has also conducted extensive research, mainly in stomach and esophageal diseases, with numerous publications in distinguished scientific journals.

E-mail: This email address is being protected from spambots. You need JavaScript enabled to view it.