Hereditary Hemorrhagic Telangiectasia (HHT) is a multisystemic disease that affect a number of organs. Although the disease can manifest with catastrophic symptoms, diagnosis is not an easy matter. It requires a clinical suspicion due to the atypical and sometimes weakness and/or absence of symptoms, and requires the cooperation of a number of specialties (radiology, cardiology, pulmonary medicine, gastroenterology, ENT).

Definition: What is HHT

Original descriptions of familial epistaxis were made by Sutton in 1864 and Babington in 1865. The name Osler-Weber-Rendu originates from the researchers Henri Rendu, William Osler and Frederick Parkers Weber, who contributed in the description and understanding of the disease.

The term Hereditary Hemorrhagic Telangiectasia (HHT) was proposed in 1909 by F.M. Hanes. 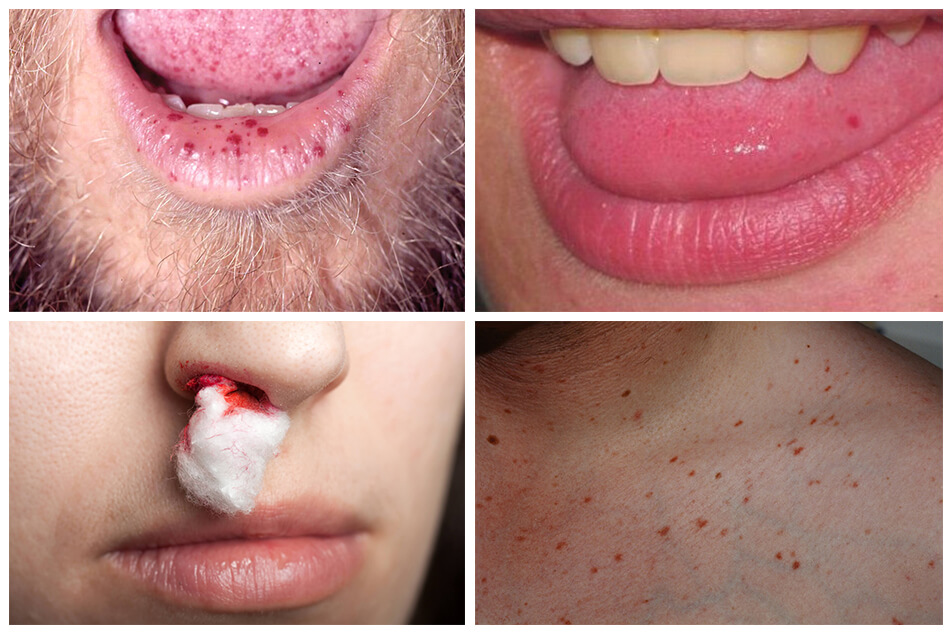 It is an inherited developmental disorder of the vascular system, which is described by an absence of intervening capillaries in the affected areas, resulting in direct connections between arteries and veins.

The small, pink to red, pinpoint to pinhead-size lesions are called telangiectases.

HHT is inherited in an autosomal dominant manner. Mutations of at least five genetic types are involved in its pathogenesis. However, 85% of all cases are due to the mutations of two genes (ENG-endoglin and ACVRL1/ALK1)

HHT is a progressively developing disease with a wide range of symptoms, which are related to age, affected organ, and type and extent of the manifestation.

Telangiectases have been described in 74% of patients, half of whom were under 30 years of age. They develop on the lips, tongue, fingers, skin, nasal, oral and gastric mucosa. Their number increases with age.

Epistaxis and GI bleeding are the most severe manifestations.

Pulmonary Arteriovenous Malformations (PAVMs)
PAVMs are present in 50% of patients with HHT. Although they are present from childhood, they usually manifest after an individual is in their 3rd decade of life. There are two pathophysiological consequences of PAVMs:

Symptoms from the respiratory system

Right-to-left shunting of desaturated venous blood leads to hypoxia and its consequences.

PAVM symptoms may include:

Shunting of emboli, bacteria and/or air to the circulatory system due to absence of a filtering capillary bed results in the development of paradoxical embolic events (transient ischemic attack, epilepsy) and abscesses in the CNS.

An increased incidence of migraine has also been described in PAVM patients.

Bleeding due to the rupture of fragile PAVM vessels to the bronchi and the pleural cavity causes hemoptysis or pneumothorax, fatal hemorrhage. It is rare (<8%) and is mainly associated with gestation.

PAVM is diagnosed using imaging, mainly chest CT. An MRA (Magnetic Resonance Angiography) is useful in the investigation of young patients to avoid radiation exposure. A pulmonary angiogram is required to investigate the vascular architecture of the malformation before embolization.

The frequency of hepatic vascular abnormalities was 74% in one study that systematically imaged the liver in HHT patients using CT and 41% in another study using ultrasound examination.

Hepatic venous malformations may be focal, namely in the hepatic artery to hepatic vein, or diffuse. Silent hepatic AVMs occur in more than one in three patients. Hepatic AVMs may manifest in high output cardiac failure, portal hypertension or biliary disease.

Diagnosis is made using CT, MRI, Doppler ultrasound or angiography.

Cerebral AVMs occur in 10% of affected individuals. They are usually multiple and silent. They can lead to headache, seizures, ischemia or hemorrhage.
Intracranial hemorrhage secondary to cerebral AVM has been reported as the presenting symptom of HHT in infants and children with HHT. A brain MRI is the most sensitive method for diagnosis.

Pulmonary hypertension is another vascular manifestation of HHT. It develops due to a variety of factors including increased cardiac output due to systemic arteriovenous shunting to the liver.

HHT patients are at a higher risk of developing venous thromboembolism. Treatment raises red flags due to the use of anticoagulants, which are not recommended in HHT patients.

Clinical diagnosis of HHT is based on the Curacao criteria, which were published in 2000.

The treatment of HHT symptoms (epistaxis, GI bleeding, anemia, etc.) is the same as treatment in individuals without HHT. Embolization is used to treat AVMs in target organs (lung, liver, brain).

In recent years, however, drugs, and specifically bevazicumab, a vascular endothelial growth factor (VEGF) antagonist, are being used, which prevent the binding of the VEGF with its receptors, Fit1 (VEGFR1) and KDR (VEGF-2), on the surface of the endothelial cells, thus reducing angiogenesis.

There are many centers of excellence in North America which follow up these patients and numerous published studies with a limited number of patients that show improvement of their symptoms after treatment with the specific drug.

As part of the effort to manage this specific disease, my colleagues and I administer this treatment at Metropolitan Hospital, which is a first for Greece.

We are also in a position to diagnose, treat and follow up patients with all forms and stages of the disease in collaboration with the North American Center of Excellence.

HHT patients must be followed up by a specialized center for life.

Upon diagnosis of HHT, first-degree relatives must undergo genetic testing. Particular emphasis is placed on testing relatives for PAVMs due to high familial incidence (>35%).

Facing a high rate of morbidity and death are: